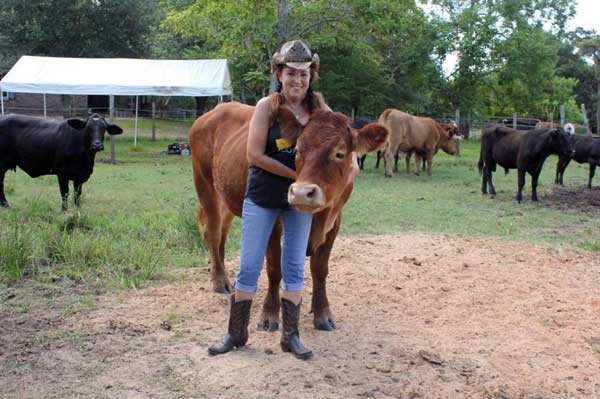 There's nothing more beautiful than a woman who strives to make life better for another living being. Ecco Bella is lucky to count some of the most gorgeous, compassionate people alive as our friends, among them is Renee King-Sonnen, founder of Rowdy Girl Sanctuary. If you haven't heard Renee's story yet, grab a seat and read this.

Six years ago Renee married Tommy. She moved from her home in the suburbs to a Texas cattle ranch. And that's when things got interesting. Renee fell in love with the animals. She named them. She spent time dancing around them, singing to them, and talking to them. It got hard to see these sweet friends of hers being sold off for slaughter.

Renee, the cattle rancher's wife, became a vegan.
And not just a vegan whose compassion focused on her plate. She was determined to make a difference. In an interview with CBS News, Renee explained, "[Tommy] was just going to get out of the business or our marriage was going to be over."

Tommy Sonnen was a sixth generation cattle rancher. How did he handle the ultimatum? Better than you might think. He decided to sell off the entire herd and get out of the family business, however, Renee had another idea.

She had been writing the blog "Vegan Journal of a Rancher's Wife," which gave her a platform to bring her plans to fruition. Tapping into her network of compassionate vegans, she raised funding via Indiegogo to finance the conversion from cattle ranch to sanctuary.

"Our farm babies are the original salt of the earth! They make our life so much better than it ever was before," writes Renee on the Sanctuary's web site. Like we said, she an Intelligent Beauty!

Ecco Bella is a fan of Renee's and of her work at The Rowdy Girl Sanctuary. We're happy to say she's also a fan of ours! To learn more about the work she's doing follow her on Twitter @RowdyGirlRanch or on Instagram @rowdygirlsanctuary.  By the way, on both social media networks, we've gotten a peek at the EB products she loves! You can also find her on Facebook at Vegan Journal of a Rancher's Wife  and Rowdy Girl Sanctuary.

If you want to help Renee and Tommy with their work, you can make a donation; or, if you're local, you can volunteer at the sanctuary.

Ecco Bella was founded with compassion and respect for the lives and well-being of all living beings on the planet. We know our beautiful customers, like Renee and like you, are filled with the same compassion and respect. Snap a picture of yourself, Beautiful, and share with us on Instagram! Tell us about an Intelligent Beauty that's had an impact on your life. Use the hashtag #IntelligentBeauty! Be sure to tag us @eccobellabeauty.